Google Says H1 tags are useful but not critical for ranking 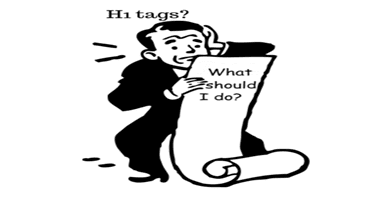 In an interesting conversation that happened during a recent Google Webmasters Hangout session, someone asked John Mueller about the importance of H1 tags on a webpage.

The answer John Mueller gave was not something most were expecting.

While he clearly stated that H1 tags help Google understand the structure of the page, he also emphasized that it is not a critical factor for ranking.

Here is what John Mueller stated:

“Your site is going to rank perfectly fine with no H1 tags or with five H1 tags.

So it’s not something you need to worry about.

Some SEO tools flag this as an issue and say like Oh you don’t have any H1 tag or you have two H1 tags… from our point of view, that’s not a critical issue.”

Can you use multiple H1 tags?

One of the questions raised during the session was whether site owners and publishers can use H1 tags multiple times on a page.

John Mueller replied by stating that “H1 tags can be used on a page as often as you want. There are no limits defined.”

Here is the exact conversation that took place:

“Is it mandatory to just have one H1 tag on a web page or can it be used multiple times?”

“You can use H1 tags as often as you want on a page. There’s no limit, neither upper or lower bound.”

So, are H1 tags important?

Here is what he had to say:

“H1 elements are a great way to give more structure to a page so that users and search engines can understand which parts of a page are kind of under different headings.

So I would use them in the proper way on a page. And especially with HTML5 having multiple H1 elements on a page is completely normal and kind of expected.”

Although John Mueller stated that H1 tags are not critical, he also highlighted that properly using heading tags would amount to a better user experience, which is what Google is always looking for.

The following comments were made by John Mueller in regard to the H1 Tag Element:

“H1 elements are a great way to give more structure to a page so that users and search engines can understand which parts of a page are kind of under different headings.

From a usability point of view maybe it makes sense to improve that. So it’s not that I would completely ignore those suggestions but I wouldn’t see it as a critical issue.”

Hence, the proper use of H1 tags would still make sense.

A perfect page structure should have a good combination of heading elements (H1 to H4 tags). Using H2, H3 or even H4 tags for sub-headings would be the ideal way to provide users with great usability. This also lets Google understand your page better.

The conversation above already makes it quite clear that H1 tags are not a critical ranking factor. However, we cannot totally dismiss the use of H1 tags.

Google’s John Mueller clearly wanted to showcase that Google no longer relies only on H1 tags for ranking, but there are many other factors involved.

This is quite understandable as Google search algorithms are now much smarter than before. So we need not rely solely on H1 tags, but must concentrate on other technical on-page elements to help achieve better rankings.

You can watch the discussion on H1 tags in the Google Webmasters Hangout session here:

Let us know what you think of this post in the comments section.

Google Says H1 tags are useful but not critical for ranking